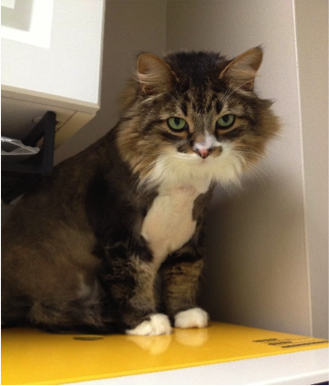 Meet the latest addition to the Coxwell family – Henry! Henry came to Coxwell about one month ago when his family could no longer care for him. Henry; previously named Ajax, was said to have been urinating inappropriately throughout his previous owner’s home. Once surrendered to us, we wasted no time in sending off some blood and urine for testing. The urine tests showed that this poor little boy had quite a nasty bladder infection due to his long fur being matted near his bum so – as you can imagine – all of his urine and feces were being caught in the fur.

Henry’s first day at Coxwell was spent in a bathtub and under a clipper blade – and surprisingly, he liked having a bath! We gave him a lion cut (this is where we shave his entire body, only leaving fur on his head, feet, and tip of his tail) which he didn’t seem to mind. Maintaining his happy attitude throughout the entire ordeal. The first week or so at Coxwell he wasn’t very perky and needed some help having bowel movements, but with some medications he is getting himself back on track and has settled into the clinic life very easily!

At nearly 9kg, Henry is a lot to love – and not just physically! Even though he’s 10 years old, he is a kitten at heart and absolutely loves his catnip ravioli toys! He will play fetch with them all over the clinic. He will make almost anything into a toy, whether it’s the broom, mop, a string, catnip toys, clinic-made vet wrap balls, laser pointers or even your hand. He loves to pretend he’s stalking his prey… from the comforts of his bed, of course! We have already switched Henry to a strict, low-calorie diet, but we try to encourage Henry to play as much as possible in the hopes that he will shed some of his extra weight.

Henry quickly adjusted to the clinic and immediately picked out which chairs are “his” – there is no sharing in Henry’s world! He’s such a good boy in so many ways and we all wish for him to find a forever home as quickly as possible. He has a wonderful temperament, rarely getting mad and he gets along with everyone he encounters! Henry is okay with the other clinic cats, occasionally having mini growling contests between each other, but he is usually the first to back down and admit defeat (even though he’s 3 times the size of our other clinic kitties!). Henry shows this same easy-going attitudes to dogs as well. He is more likely to run back to the comforts of his bed than attempt to stand his ground – no matter how big or small his opponent may be.

Henry and his big personality are looking for their forever home so if you are interested, be sure to give us a call or pop in to say hello!