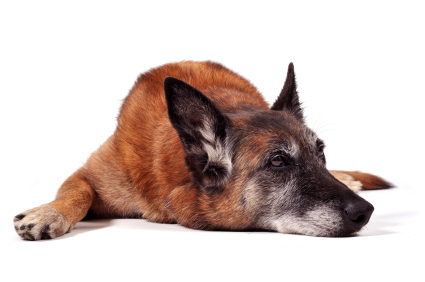 Canine osteoarthritis, or Degenerative Joint Disease, is much like human arthritis.  As the name suggests, it is a degenerative disease that slowly gets worse as time goes on. It affects the joints, most commonly the knees and hips in dogs. Arthritis usually comes with age, but is also associated with inherited diseases such as hip dysplasia and patella luxation, which can occur at any stage in a dog’s life. It is also common in over-weight dogs, as added weight puts extra stress on the joints.

Arthritis is caused when the cartilage between the bones starts to wear down until there is no cartilage left. Cartilage absorbs the shock between the bones, and once its gone, it is just bone on bone friction. This causes inflammation of the joint tissue, which in turn can become very painful.

Arthritis can have many symptoms. Most commonly, owners come in concerned that their dog is limping or lame. This is the most common symptom of arthritis in dogs. Some other symptoms include:

Arthritis is diagnosed with x-rays. Arthritis is not curable, but treatable. Many dogs can live full, happy lives with arthritis. Treatment can be done with medication, supplements and even certain exercises.

There are so many treatments for arthritis, a lot of them coming from alternative medicine. The most common go-to to treat arthritis is NSAIDs (non-steroidal anti-inflammatories). NSAIDs, like Metacam, are anti-inflammatories. They are given daily to help reduce the pain associated with the inflammation caused by arthritis. Another popular medical treatment is an injection called Adequan. Adequan helps to prevent the cartilage from wearing away.  Both of these can only be obtained from a veterinarian.

Because there are SO many alternative therapies and supplements for arthritis. Find more here.