This is going to be hard to write, but I’m honoured that I’m the one that gets to write it.

Cici was my 3 year old boxer. I adopted her when she was 2 from Homeward Bound Rescue. She was a rescue from a puppy mill in Ohio. When I first met her I fell in love with her. She was so shy, but she felt comfortable enough to come up to me. I was approved to adopt her and she sat in my lap on the drive home. It took her a few days in her new home to be comfortable with me and my other dogs, but once she was, boy did her bum wiggle with happiness. She folded herself in half with joy and excitement from her wiggle bum.

Shortly after I adopted her, I moved back in with my dad. My dad fell in love her with her too and let me keep her and my pug Eddie. She loved my dad and she loved car rides and most of all she loved Eddie. He showed her how to be a dog.

For those who have never owned a puppy mill rescue, everything is new to them. They have never had the chance to be a dog. Cici had no idea how to socialize with other dogs. She never really understood it. She would follow Eddie around the dog park and sniff what he sniffed and if another dog started to play with him, she would try to join in. Grass was new to Cici. Switching floor surfaces, like going from tile to hardwood, was very difficult for her to do in the beginning. It was scary. She had never felt things like that before. No puppy mill dog has. Stairs were alien to her. She caught onto them quickly though, and was always running up and down the stairs when she would get excited. She had no idea how to play but again, when she would get excited, she would grab a toy and run around with it in her mouth, wiggling her bum like a maniac. Eating from a bowl was new. I had to hand feed her for a couple of months, slowly bringing her closer to her bowl until she was so comfortable, her dog tag could hit the side of the bowl and she wouldn’t run away. That’s another thing puppymill dogs are scared of, every single little noise. Drop a pen and they run. Just going outside was so absolutely terrifying for Cici. It took quite a while before she would go to the bathroom outside, in fact she never really was fully housetrained because of that. Thunderstorms were the worst. She would become so anxious she couldn’t stay still. I remember she would always seek me out and sit almost right on top of me, knowing I would protect her. But I couldn’t protect her from the damage the puppy mill had done to her poor little body.

When I got her she was skin and bones. She had trouble gaining weight on traditional vet diets, until I switched her to a raw food diet, then she was on the verge of being overweight! She had scars on her arms that I can only assume came from abuse and possibly injuries that never healed properly from getting her legs caught in the wire bottom cages. But I think her insides were hit the hardest and were so beaten up from the years in the puppy mill.

Near the end of January, she suddenly started drinking so much water and would burp these horrendously foul burps, like her insides were dying. My dad says they call it ‘the kiss of death’ in people. I had recently done blood work in November, but her blood work done in January was much worse. Her kidneys and liver were failing. There was also something else going on with her globulin levels that indicated another underlying problem not even related to the kidneys and liver.

Before I started working at Coxwell, I took my Cici there. Dr. Jessica Scott was her doctor. She spoke with an internist at the company we send blood work to, and no one really knew what was causing the kidney and liver failure. I kept Cici at Coxwell, hospitalized and on IV fluids, for two days. It was a Saturday when the repeat blood work came back. It showed slight, as in only a few numbers, improvement in her levels. I had made my decision before I got this news that if there was no improvement, I couldn’t put my Cici through any more treatment. I knew the odds, I’ve worked in the industry long enough to know, and it wasn’t fair. She was so scared and so sick. She had already been through so much in her short life and come so far with me, if I transferred her to emerge all of that would have be undone from pure fear. That Saturday was the hardest day of my life. Nothing can ever prepare you for losing someone you love so much, but I feel like this was so sudden, within a week Cici had gotten so ill, that it was that much harder. I let my baby girl go to the rainbow bridge, taking comfort in the fact that she had the opportunity to know what true love is, and got to pass away in the warm arms of someone she loved, instead of alone in the cold cage of a puppy mill.

I miss her every day, and if you ever see me in the clinic, I wear her dog tag around my neck so I can always have her with me. She taught me so much. I loved her so much.

Please, before buying that cute little puppy from a ‘breeder’ or Kijiji, please think about where it is coming from. Let Cici’s story be a reminder of the mom that those puppies leave behind to be bred over and over again, all for profit, never knowing love and compassion. Don’t support the cruelty of puppy mills. You are not saving the puppy, you are ensuring the cycle continues.

A lot of tears went into writing this. Thank you for reading it. 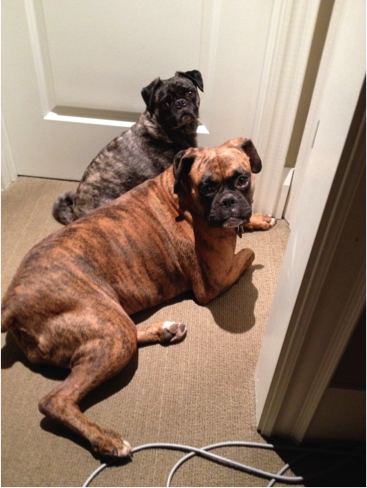