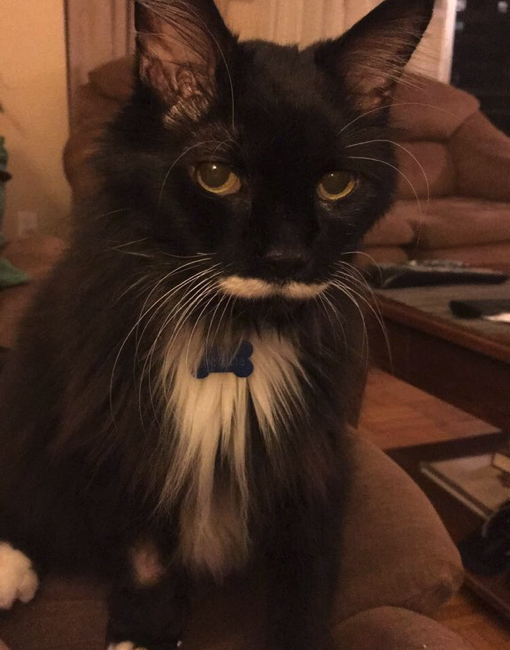 “This is only for a few days then he is going back” is what my mom said to me on the way home from picking Freddie up to stay with us for the New Year’s Eve long weekend.

Except – he didn’t go back (well he did for 2 short days but we’ll get to that later) he ended up coming to live at my home with me, my mom, and our 2 other pets, a cat and dog and thus turning his life upside down once again.

Freddie Mercury came to our clinic back in the summer of 2016. I didn’t have the pleasure of meeting Freddie until November of that same year and I instantly fell in love. He slowly walked towards me meowing like crazy and stole my heart. He was starving for some love and attention and every time I would sit down, he would somehow wind up in my lap begging me to pet him.

Over the next few weeks, I became acquainted with our mustached little buddy and part of my job was to give Freddie his medicine in the evening. As I started to get used to doing this every evening, I feel I became more bonded with Freddie, I spent a lot of time with him, I fed him every night and gave him his meds every night. Although I don’t know if he felt the same way as every night he would know when it was medicine time and hide from me – a couple times I had to crawl into a small space just to convince him to come out.

Around a week before New Year’s Eve is when I decided to break the news to my mom that I volunteered to take Freddie home over the long weekend. It took some convincing and begging but she finally relented but it was “only for the weekend no longer” The change in behavior I saw in Freddie as soon as I brought him home was astonishing. He made himself right at home on my bed and promptly fell asleep 10 minutes later (can’t blame him as he was screaming bloody murder in the car)

When the weekend was up I was an emotional mess, I finally found a buddy to cuddle with at night! I did not want to bring him back. It took two days of constant begging and my mom finally gave up and let me bring Freddie home for good. We are technically fostering him as he is quite an expensive cat but I am so glad to have the opportunity to meet such a loving cat despite being abandoned in his golden years.

Freddie is now a permanent fixture in my life and I would not have it any other way, he makes my day so much better with his quirky personality and is constantly talking to me through his many meows.