The Story of Sebastian and Xavier

When Sebastian and Xavier first arrived at Coxwell, we weren’t entirely sure what to make of them. They were quite rough around the edges and didn’t seem very impressed with their new place to live. Sebastian was full of attitude and Xavier looked quite confused, but that all quickly changed. At the end of July, we welcomed them both into our clinic home due to an unfortunate circumstance which had left their previous owner unable to care for them to the extent that they needed. Out of love and care, their mum decided it was best for them to be with us, even though she didn’t want to say goodbye to them.

Sebastian, always the grumpier and tougher of the two, was diagnosed with hyperthyroidism as well as irritable bowel disease a few years ago and gave his previous owner a tough time medicating him. Once he came into our care, we sent off some bloodwork and found his thyroid levels were still not controlled. Over the last few months, we have had to change his dose a few times in attempts to adequately monitor his values, and have all gotten lots of practice with giving him his medication. It almost seemed to work hand in hand – the more controlled his thyroid became, the more relaxed he was to medicate! 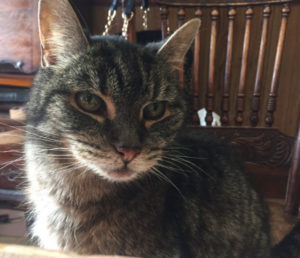 Xavier, on the other hand, has always been the cuddlier of the two cats and loves to give headbutts. Once arriving with us, we found what we believed to be a bad cold or an upper respiratory infection. We quickly placed him on antibiotics, but when we didn’t quite see him improving as we had expected, we realized the infection was stemming from his teeth! He had formed oronasal fistulas which are small tracts running from the infected tooth roots into the nasal cavity. Our team performed dental surgery on him and extracted the infected teeth, also clearing up his nasal discharge. We found Sebastian also needed some dental work. Once his thyroid became controlled, we then took him for a dental procedure as well. 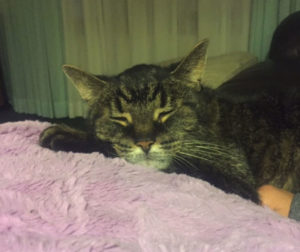 These boys learned to love their new home. They were feeling better, were enjoying their new toothless lifestyle, and had learned to run the clinic, but we all knew a clinic wasn’t meant to be their forever home. So, at the beginning of October, our technician Claire took them home with her. Within a few days, they had taken over the entire house, exploring all its nooks and crannies and discovering which bed was the most comfortable. These boys who had once seemed so rough around the edges have become energetic, playful and cuddly sweethearts. They are silly, loving, laid back, and are genuinely enjoying their forever home.