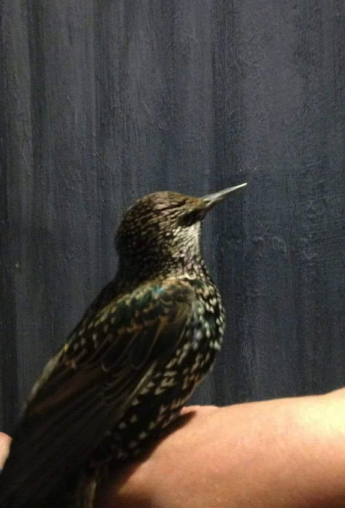 Clarice Starling Was a Remarkable Bird

This Blog is for her…. 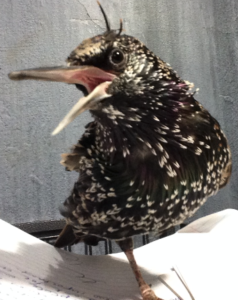 Clarice was a European Starling who was brought in as a fledgling to the animal hospital that my closest and dearest friend worked at. She was grey and hungry and her leg terribly twisted and broken with a compound fracture. This little bird in no way could be rehabilitated- her leg was beyond repair. Rather than euthanizing, my friend promised that doctor that if the bird survived having the surgery that she would become its guardian and raise it along with her other birds.

Clarice not only survived, she thrived.

My friend soon learned how special this bird was. After a short while, the birds learned to fly, take baths in her little pool, steal lettuce out of a sandwich and land in your hand wanting to be tickled. A little while longer, she began to talk- her first word being ”again”, in reference to a dip in her little pool.

Clarice lived in the studio, with several other feathered friends, which overlooked the back garden. The entrance to this room was a reclaimed screened farm door that was fitted with Plexiglass 3/4’s of the way up. The Plexi kept the birds safe from the cats who would press their nose against the glass watching the birds sing and play. Clarice would sit on my friends’ shoulder while she worked and would babble on and on when a movie was playing. She was like one of those friends that you hate going to the movie theatre with, who would talk during all the best parts. You could scold her and tell her to be quiet and she would be until a really quiet part of the movie when she would say her name over and over “Claaaariccce” followed by “ is a pret-ty birrrd”.

It was especially weird when using the bathroom in the middle of the night, the bathroom is next door to Clarice’s room. Dark and quiet- you walk past and you would hear “Hiiiiii” in a soft voice.

Frank Sinatra was a favourite of Clarice as was Billie Holiday and Ella Fitzgerald- she was not so keen on repetitive pop music where all the voices sound like chipmunks in heat. She also really enjoyed classical music – especially Mozart’s Piano Concerto No. 17.

Mozart had a starling friend actually; of who this piano concerto is sometimes dubbed. While passing the open window of a pet store in Vienna, Mozart heard the bird singing part of one of his recent works. Mozart was smitten, he purchased the starling it lived with him for over 3 years. It is not certain if part of the concerto was “written” by the starling or if Mozart taught it to the starling inadvertently when he would hum his works while frequenting the pet shop.

When Mozart’s starling died he was heartbroken, an elaborate funeral procession was held to commemorate his bird friend and it was buried in the garden with a headstone. Mozart also wrote a poem- while not entirely beautiful, it is heartfelt none-the-less.
Mozart’s poem was translated by Robert Sparthling.

His music is much better than his poetry.

Clarice herself had a whole repertoire of words, phrases and tunes that she would blurt out any time she was happy. Attached is a short video of Clarice singing, whistling and talking while listening to a version of “Paper Moon”. Some of the phrases below can be heard in the video-

Starlings are not a species native to North America. They were introduced in 1890 by a Shakespeare aficionado named Eugene Schieffelin who wanted to pay homage to the Bard by bringing birds mentioned in his plays to American soil. By 1891 he released a total 100 starlings that he imported from Europe in New York’s Central Park. In my opinion, we have been blessed by their presence ever since. Some people disagree and they are often seen as pests but reports show that the American Robin is about twice as destructive to grapes and cherries as Starlings. Food studies research also confirms that almost 60 percent of their diet consists of insects and that they rarely consume grain. This includes some detrimental insects: grasshoppers, weevils, scarab and Japanese beetles along with leatherjacket larva (marsh cranefly) that eats the roots of grass plants.

One of the most amazing phenomena is when a group of starlings fly together in the thousands called murmuration. The birds fly closely together almost as if with one mind undulating, whirling and making patterns. Reasons for this may be to protect against predators. A falcon would have a hard time honing in on one bird to attack. Keeping or perhaps discussing the best feeding and nesting spots might be other reasons.

A fantastic video of this phenomenon is shown here.

Having had the wonderful honour of getting to know Clarice will forever change my view of starlings and of all birds in general. The bond that Clarice and my friend had was beautiful. Watching her fall asleep in her mum’s hand during movie night like a kitten was one of the sweetest things I have ever seen.
She will always have a special place in my heart and will be missed.
I am so sorry for your loss my dear friend.’

“Human emotions are a gift from our animal ancestors. Cruelty is a gift humanity has given itself” 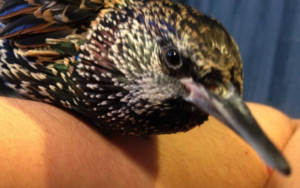