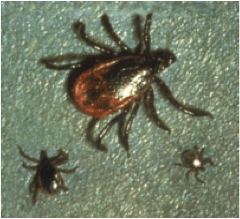 Until about seven years ago, ticks were not believed to be a problem for dogs in Ontario. Veterinarians would rarely talk to pet owners about ticks and tick-borne diseases and when we did, it was only for animals with a travel history. Then everything changed. Now, tick populations are endemic on the northern shore of Lake Erie and Lake Ontario. These tick populations are spreading north faster than even human public health agencies have predicted. Ticks and tick-borne diseases are now something that all pet owners in Ontario should be asking questions about.

There are two types of ticks to be aware of in Ontario. The American Dog Tick (Dermacentor variabilis) and the Black Legged Deer Tick (Ixodes scapularis). A third species of tick, the Lone Star Tick (Amblyomma americanum), is predicted to be in Ontario within five years. None of the aforementioned ticks can infest your house – they are strictly an issue for you and your dog or cat.

The American Dog Tick is found in grassy meadows, young forests and along trails. They are most active in the spring and somewhat active in the summer. The ticks wait on long blades of grass and jump onto potentials host that walk by. Once there, they will bite, latch and feed on the host. Potential hosts include wild rodents, wild life, dogs, cats and people. American Dog Ticks in Ontario do not currently transmit any disease-causing pathogens.

The Black Legged Deer Tick is found in deciduous forests and adjacent brush and grasses. They are most active in spring and fall, and tend to be dormant in the summer. They, like the Dog Tick, wait on blades of grass for you or a host to walk by. Potential hosts include: deer, mice, birds, dogs, cats and people. The rapidly expanding deer population and changing migration patterns of birds are the two main reasons this tick is expanding quickly across northeastern North America. The Deer Tick can potentially transmit Lyme disease and in rare cases anaplasmosis to you and your pet. Humans are also at risk for a rare disease called babesiosis.

Lyme disease, named for a town in Connecticut where the disease originated, is caused by a bacteria (B. burgdorferi) that infects the Deer Tick. Lyme disease will present in dogs as generalized malaise, fever, shifting leg lameness and very rarely, kidney damage. Lyme disease responds very well and quite rapidly to an inexpensive course of easily-sourced antibiotics. In people, Lyme disease is much more serious and much more pathogenic.

Ticks need to be attached for a minimum of 24 hours to pass on the bacterium-causing disease. An infected dog will only show clinical signs 2-5 months following exposure. It is important to note, we would only see evidence of Lyme disease on bloodwork 3-5 weeks post tick bite so even if a tick is found on your dog, we cannot prove exposure to Lyme disease for at least 5 weeks.

Most recent data, from 2013, suggests that up to 18% of ticks in Ontario are infected with B. burgdorferi. However, unlike people, where exposure carries an enormous risk, approximately 95% of dogs infected with Lyme disease will never get sick.

The best way to avoid exposure to tick-borne diseases is to minimize the risk of ticks biting and latching for extended periods of time. After walking your dog in an at-risk area, carefully check through his/her fur for ticks. Remove ticks carefully, doing your best to avoid leaving mouth parts behind. A quick lesson from one of our technicians at Coxwell Animal Clinic would be a good idea for anyone who likes to walk their dog through tall grasses. As well, there are a host of new tick preventive products on the market. Talk to one of our veterinarians about your dog walking habits and vacation/cottage plans and we will suggest an appropriate tick prevention plan for your fur family. Finally, if you vacation in Connecticut or in another hot spot in the northeastern seaboard of the US, we may recommend a Lyme vaccine for your at-risk dog.

Ticks are an emerging parasite in southeastern Ontario. There is nothing we can do to stop them. What we can do is educate ourselves on how to keep our pets healthy and talking to one of the veterinarians at Coxwell Animal Clinic is the first step. Spring is here and that means ticks are waiting for you and your dog. Make an appointment today.