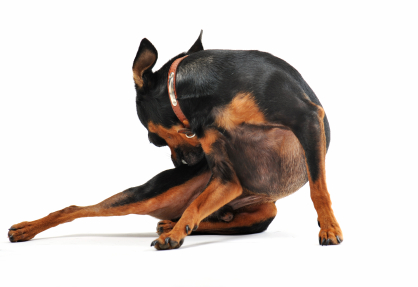 Allergies; environmental, seasonal or food related all of the above never tend to be an easy fix for our canine or feline companions. The road to a diagnosis isn’t something that comes over night; and can take many rounds of trial and error before finding something that gives some relief.

So, how does the road to relief start? Well first of all it is important to understand that when dealing with allergies we have to come to terms with the fact that this isn’t something that can be cured, yet something that can be controlled. Accepting this is the first step to understanding allergies and how to deal with them.
If you’re noticing excessive scratching, redness or hair loss of the skin this can be the first sign. Taking your pet for a consultation in the first stages of allergies may avoid the potential for secondary infections such as pyoderma (Infection of the skin) and an overall worsening condition.

Although the list of rule outs is long, I thought I might skip over preliminary diagnosis and jump right into the nitty gritty of it all to the most common cause of allergies; food.

Now of course as stated in my previous blog I talked about my muse and my real reason for entering the world of veterinary medicine, my dobie Ryder. He himself has suffered from horrific skin allergies since the age of 6 months old! He has hardly gone a day or two without some sort of flare up always having me ask the question why. Finally after investigating to the best of my abilities, with great veterinarians who did everything from explore food options for me as well as new progressive medicine, we decided it would be in Ryder’s best interest to meet with Dr. Yu, a board certificated dermatologist who has an office at the Mississauga Oakville Veterinary Hospital.

Within minutes of Ryder meeting with him, he had confirmed our suspicions. He did indeed have a food allergy.

Now up until this point we had been treating conventionally with Vanectly-P (A steroid anti histamine combination used to help with itching of the skin), antibiotics (for those pesky secondary infections) and Hills Z/D Ultra: A food designed specifically for allergy cases. It works by hydrolyzing protein, making the protein molecules smaller, so the body has an easier time absorbing them.
We discussed Ryder’s current treatment plan at length before we discussed what was next.

Next, time to determine a Novel Protein source, something Ryder would never have been exposed to in the past i.e. fish or kangaroo.

This diet is to be exclusive for 90 days, with strict efforts being made to not introduce anything else. He had recommended a commercially prepared diet produced by Iams Veterinary called K/O for kangaroo and oatmeal. He had also recommended commercial diets containing salmon, but we decided to try a home prepared diet for Ryder containing only raw salmon for 90 days.
We also took his recommendation of continuing Ryder on the Vanectyl-P until the symptoms cleared up, and a final course of antibiotics.

He made note that is symptoms were to worsen they would do so within 14 days or starting this process. He did warn us that home preparing meals can be time consuming and tedious, so we decided that to make the experience enjoyable versus a pain and contacted a good friend who happens to own a raw food establishment in the west end called Big Paws. Not only does he have a wide variety of novel protein sources including rabbit and salmon, but he takes the hard work out of preparing the food for you by cutting the meat into bit size pieces with a table saw (no joke!). With a plan in action, we started this new journey with Ryder with everyone in the family on board.

It has been 8 months since we began Ryder on his food elimination trial. Since the 90 days expired, we have added cooked sweet potato to his diet as well as a nutritional supplement called Hilary’s blend. Although he still has the occasional flare up, Ryder’s coat is healthy and he has regained some hair growth. The yeast infections and secondary skin infections have cleared and he has been gaining weight and is keeping it on.
It has been a long road to get to this point with controlling his condition, but with patience and perseverance it is achievable.