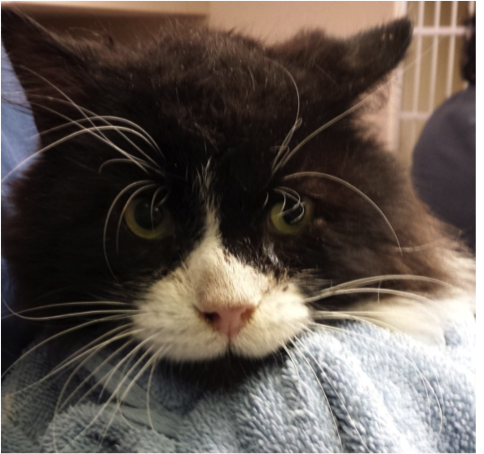 Saving Sylvester: The Story of the Sylvester the Stray

At the beginning of April, one of our very caring clients had brought in a stray cat that needed medical attention. There are many strays in his area, and he was very familiar with this one, Sylvester. He has always been very friendly: approaching him for meals and interacting with people. He had noticed a large wound on the back of his head and was able to bring him in for treatment.

When Sylvester arrived at the clinic he had a very large wound encompassing the whole back of his head! 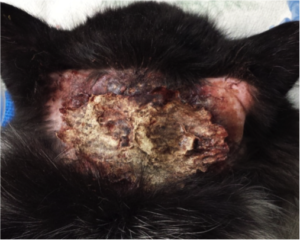 As you can see from the picture, the wound was quite extensive. There was a very thick scab, and the wound was quite deep. It was infected and painful. We also found a few scratches on his body, broken teeth, fleas, an upper respiratory infection and a sore front leg. Despite Sylvester’s condition and being a stray he was still very affectionate and sweet with us during his exam. We went over all the options with the client and it was decided to go ahead with a surgical procedure, and he would stay at the clinic while he recovered. Although this wasn’t technically his cat, he was hoping to adopt him and graciously offered to pay for his medical treatment!

That day Sylvester was anesthetized to debride his wound, extract his broken teeth, and neuter him. He did very well during the procedure and recovered well! He was placed on medical support for the wound and an upper respiratory infection.

We had sent out bloodwork, and unfortunately he was FIV positive. FIV is a feline virus, similar to HIV in people. Cats can remain asymptomatic for many years but are at risk of spreading it to other cats. The most common route of transmission is through bite wounds during fighting.

This posed a dilemma for our client who loved Sylvester and really wanted him in the home. But he has other cats at home and was unsure if they would get along. It would be too risky to send Sylvester to his home.

Our clinic staff offered to keep him here and take care of him until we were able to find a suitable foster home. With each day he would become more social and affectionate. Our client visited with him daily which helped with his socialization. He was also improving medically! His sneezing was almost gone and his head wound was markedly improved! The picture below is 2 weeks after debridement. 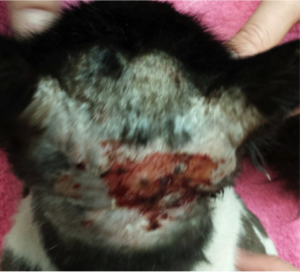 The wound had healed to a very superficial skin wound and has been scabbing over nicely. We had reached out to the Toronto Cat Rescue, and they were able to find a suitable foster home for Sylvester!

He is now in a nice warm home, enjoying snuggles and being well fed! He’s a very lucky guy to be found by our client and taken care of appropriately! And now he has a loving home to live in! 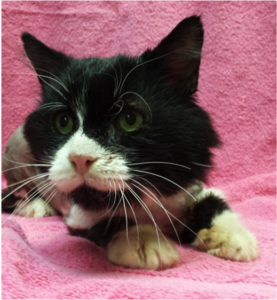